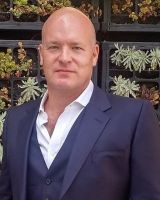 Jason is a Director of the company.
[full biog]

Jason has been involved with the entertainment industry since the age of 5 – when he tap danced on stage with Roy Castle.  By the time he’d reached his teens, he realized that performing was probably best left up to those with more talent and he began writing and directing, which led to him producing his first play at 19 years of age.

Jason has now produced 14 West End shows including, Footloose – the Musical, Never Forget, Yes Prime Minister, The Ladykillers, Curtains and New Boy.  He is an originating producer of The Whatsonstage Awards.  He has also been a Producer on 26 touring shows, including High Society, The Steamie, The Wedding Singer, Fame, Flashdance, Rock of Ages, Wasted, and An Officer and a Gentleman.  He has Executive Produced in South Africa and worked with Lythgoe Family Entertainment in Los Angeles since 2010 bringing pantomime to America with such performers as Arianna Grande and Neil Patrick Harris.

Jason founded Big Finish Productions in 1998 and the company has grown to be the largest independent producer of Audio Drama in the world, working regularly with media corporations such as the BBC, ITV, MGM and ABC on Doctor Who, Torchwood, Stargate, Space:1999, The Avengers, The Prisoner and on original series such as The Confessions of Dorian Grey.  Producing 322 hours of drama in 2018, Big Finish won the BBC Audio Drama Award for Best Drama for Doctor Who in both 2014 and 2017.

In 2005, Jason was a founding director and helped fund the creation of the actor’s agency Cole Kitchenn, which became part of the ROAR Group and subsequently Intertalent (AC).

In 2011, Jason also founded the animation house Big Finish Creative in Sydney, Australia, working first with the BBC on three animated versions of Doctor Who and then producing the original 26 part drama Prisoner Zero for ABC and Netflix.

For television, Big Finish Entertainment has produced two reality shows – Nadia Goes to Hollywood and Nadia: Chasing the Dream for TV3 and been involved with reality shows Strictly Dance Fever (BBC) and Fame – the Musical (RTE).  Jason is presently developing a new teen television drama for an Australian broadcaster.