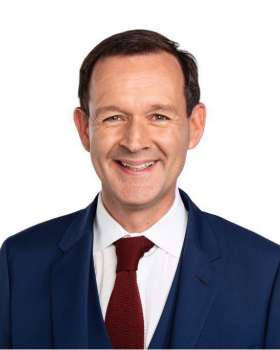 Adam is Head of Boxing at Sky Sports and one of the most established, knowledgeable and successful sports broadcasters in the industry. He has been at Sky for nearly 25 years and is the former Chairman of The Boxing Writer’s Club.

A hugely popular TV presenter, commentator, author and television leader, Adam is a Broadcast Award and RTS Award winner and has been nominated for a BAFTA, SJA and The Sports Book Awards for his fascinating first book, Beautiful Brutality.

Adam has amassed a huge number of contacts in the sports industry along the way and in his role as the Head of Boxing at Sky Sports he remains one of Boxing's most influential and important figures. Along with Matchroom’s Eddie Hearn, and of course the ascendancy of Anthony Joshua, Adam has rebuilt the sport of Boxing to new ‘stadium’ levels as well as still ‘calling’ the huge fights at ringside for the millions watching on TV around the world. He most recently provided the now legendary commentary for Floyd Mayweather v Conor McGregor and Anthony Joshua v Vladimir Klitschko.

His career really began when he was 10 years old. A complete sports fanatic, Adam used to turn down the sound on radio and television and commentate into a dictaphone - well before his voice had even broken! Now in his mid-forties, Adam has one of the richest, most powerful and recognised voices in the sports business.

Adam studied drama and television at Davidson College, North Carolina and Warwick University whilst writing for The Ham and High Newspaper and undertaking running, guest support duties at TV-AM. He then worked in the political bureau of CNN in Washington, the London office of NBC and the Home News department of ITN.

Adam joined Sky in its infancy in the mid-90’s and rose through the ranks, crafting and voicing all-sports shows whilst honing his skills within the fascinating and unpredictable world of Boxing. Behind the scenes and in front of camera, Adam became an expert in the pugilistic and television worlds.

Adam is a huge fan of absolutely every sport – particularly tennis and football - mentors young Sky scholars and has also hosted a string of major social and charity events, corporates, Q&A’s and is a fast and funny auctioneer.