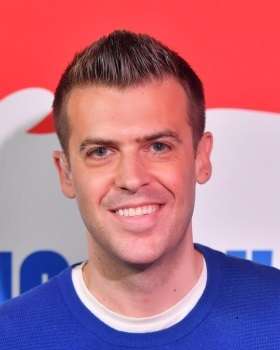 Adam Smith is quickly becoming one of the most recognisable faces in sports media.

His wide-ranging roles include working as a Presenter for Sky Sports, talkSPORT, Tottenham Hotspur FC and England. In addition to this, Adam has fronted an array of branded content partnerships and is regularly seen hosting hospitality and in-stadium events.

As a presenter on Sky Sports, Adam's current work includes hosting GOALS ON SUNDAY, SATURDAY SOCIAL, Budweiser's KING'S OF THE PREMIER LEAGUE and THE DEBATE.

Adam also conducts weekly interviews with some of the biggest names in football. In the last few months alone, these have included the likes of Jurgen Klopp, Pep Guardiola, Frank Lampard and Kevin De Bruyne. Adam can also be heard co-hosting shows on talkSPORT.

His roles for Tottenham have included hosting the build-up to the opening ceremony for the first ever game at The Tottenham Hotspur Stadium and presenting all the exclusive, behind the scenes content with the players and management staff for the Champions League Final in Madrid. Adam has hosted player interviews for England's official YouTube channel, presented the FIFA e-World Cup Live from The O2 Arena and a host of other e-sports events for the Premier League and Sky. Adam was part of the presenting team for KSI vs Logan Paul fight (labelled 'the biggest event in internet history') Live from The Staples Centre in Los Angeles, was in Italy covering the U21 European Championships last summer and even hosted an event at Windsor Castle on stage in front of 5000 people as part of The Queen's 90th Birthday celebrations.

He is regularly used to host the Official FA Lounges at Wembley Stadium as well as a pitch side presenter on match days for England games which include interviewing the likes of Gareth Southgate and Harry Kane pre and post-match.

Adam has been part of Poker Stars presentation team for events in the Bahamas and Barcelona and has presented an array of branded content projects with the likes of BMW, Nike, Lucozade, William Hill, Hankook Tyres, Renault, Budweiser, Carling and more.

As a Type 1 Diabetic Adam is a proud celebrity ambassador of JDRF (the UK's biggest T1 Diabetes charity) and has done a host of events to raise money for this charity which is very close to his heart.

Hosting the FIFA eWorld Cup Grand Final from the 02 Arena