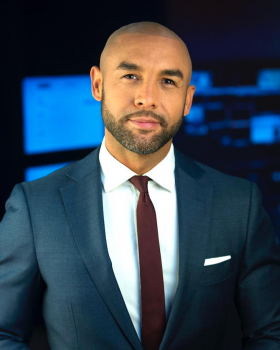 Alex Beresford is one of the most familiar faces on GOOD MORNING BRITAIN (ITV) as he covers both main presenting duties and the ITV Weather.

He's the face of Channel 4's popular returning series WORLD'S WEIRDEST WEATHER and BRITAIN'S MOST EXTREME WEATHER. One of Alex's highlights so far was being flown out to America by Channel 4 straight after an EF5 Tornado hit Oklahoma back in 2013 to make a fast turnaround documentary SUPER TORNADO on the devastating after affects that destroyed a city.

Alex has recently started to report and present for ITV's long-standing current affairs programme TONIGHT. He also reached the semi-finals of Dancing on Ice on ITV1 in 2018.

Away from the cameras Alex can often be found at a school or college delivering inspirational talks to young people across the country. His natural passion to inspire the next generation landed Alex being awarded an Honorary Doctorate of Philosophy and was also selected as a National Black Role Model in 2008 by the Governments Reach Role Model Programme.

Alex will next be seen alongside his GMB co-host Ranvir Singh on new ITV travelogue ALL AROUND BRITAIN which will air later in 2020. Alex & Ranvir will travel to a different location for each episode of the series to celebrate life in various towns, cities and regional communities