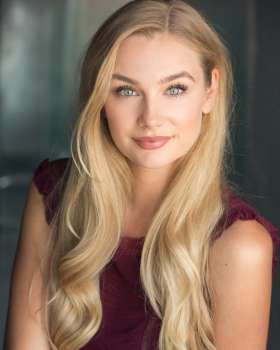 Prior to her West End debut, Amy had performed internationally as a soloist with the London Handel, London Cello and the Perth Symphony Orchestra’s. She had also sung at iconic venues such as the Seoul Arts Center in South Korea and at Buckingham Palace for the Prince of Wales. Most recently she was honored to sing the Australian Anthem for HRH Prince Harry and Ms. Meghan Markle for the 2018 Anzac Day Memorial Service in London.

Amy graduated with a Masters of Performance in Vocal Performance from The Royal College of Music with a Distinction. Here she sung the title roles of ‘Gontran’ in Chabrier’s Une éducation manquée with the RCM International Opera School and ‘Clotilde’ in the London Handel Festivals production of Faramondo.

A diverse performer, Amy also has a unique history in rhythmic gymnastics and pole vaulting, winning gold medals at the Australian National Championships in both fields.