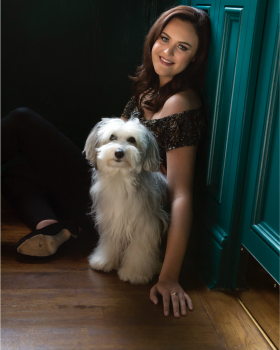 When Ashleigh Butler first auditioned for Britain’s Got Talent with her dog Pudsey, Simon Cowell declared “This is what I’ve been waiting for all my life. You are one of my favourite ever acts”

Since winning UK’s biggest talent show in 2012 with their breath taking performances, there's been no stopping in Ashleigh Butler and her super dogs.

With the world famous Pudsey, she danced the conga with Kim Kardashian, flown in a private jet to Hollywood with Simon Cowell, released an autobi-dog-raphy, performed for the Queen twice, won numerous awards, appeared on dozens of TV shows across the world, released their own calendar, an auto-bi-dog-raphy which sold out within 3 days, broken theatre ticket records, performed on award ceremonies, presented TV series, graced dozens of magazine covers, rubbed shoulders with Leonardo Di Caprio at the Cannes Film Festival and have become global film stars.

After winning the show, Simon Cowell flew them in his private jet to Hollywood and New York where they appeared on The Tonight Show with Jay Leno, America’s Got Talent, Access Hollywood, Extra with Terri Seymour, Good Morning America and E! News amongst others. The duo was also invited to perform for the Queen twice. First, at the Epsom Derby in front of a 100,000 strong audience, as well as alongside the best of British acts, in front of Her Majesty for the infamous Royal Variety Show in November 2012.

In May 2013, Ashleigh attended the Cannes Film Festival, rubbing shoulders with Hollywood stars Leonardo Di Caprio and Nicole Kidman. She promoted their feature film Pudsey – the Movie, which hit the cinemas in July 2014 produced by Vertigo Films. Pudsey was even voiced by comedian and BGT judge, David Walliams!

Ashleigh then established herself as a presenting talent and personality in her own right – most notably as Lead Presenter on 15-part series Who Let the Dogs Out on CBBC. Her other appearances have included Tog Dog Model, Super Famous Animals, CBBC Who Let the Dogs Out & About, Red or Black and Pet School in the can. She also appeared herself on Celebrity First Dates om Channel 4.

Ashleigh has also become one of Britain’s biggest pantomime stars, performing with Pudsey and his cousin Sully for many years. Performing in Dick Whittington, Jack & The Beanstalk, The Wizard of Oz and Cinderella they have broken box-office records all over the country.

Now a multi million pound act, there’s no doubt that Ashleigh, Pudsey and Sully have made an indelible mark on the entertainment industry and now Ashleigh has even bigger sights ahead to conquer the world with Sully and his friends, hand in paw!