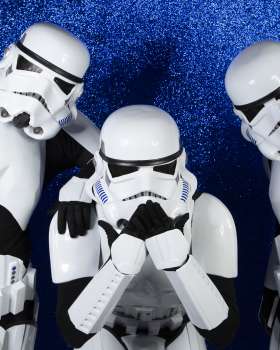 Dressed in iconic stormtrooper armour, Boogie Storm are a force to be reckoned with. They are the only act ever to win two golden buzzers from Simon Cowell. They were honoured with an invitation to compete on the inaugural Britain's Got Talent: The Champions in 2019, and recently launched in the USA by finishing as finalists on America’s Got Talent: The Champions (NBC, 2020).

Boogie Storm enjoy a large online following, and have racked up +350 million views online, making them one of the most successful viral dance groups in the world.

You could say that the force is strong with Boogie Storm, and you’d be right!