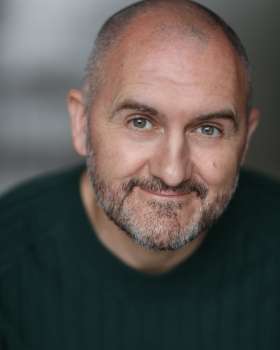 Carl most recently played the role of Phil in the UK Premiere of ON YOUR FEET, the story of Emilio & Gloria Estefan at The London Coliseum.

Previous to this, he played Billy Flynn in CHICAGO for Pitlochry Festival Theatre, after previously assuming the role of Roscoe Dexter in SINGIN' IN THE RAIN for their Winter season.

Other credits include the UK Tour of Arthur Miller's The Crucible, Benny in GUYS AND DOLLS at the Savoy Theatre, West End, HELLO DOLLY and THE LADYKILLERS for Pitlochry and the role of Rory in SEX AND THE SUBURBS for The Royal Court, Liverpool. He has also played in AND THE RAIN FALLS DOWN for Fevered Sleep/Young Vic, OF MICE AND MEN at Watermill Newbur, Steve in LIAR LIAR at the Unicorn Theatre for Blanche McIntyre, Landlord in TWO, Henry in PRESENT LAUGHTER and Dafydd in A CHORUS OF DISAPPROVAL (as part of the 2013 rep season at Pitlochry Festival Theatre).