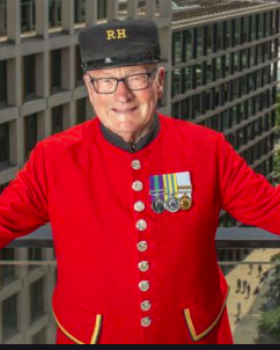 Colin's album 'Love Changes Everything will be released early December.

Colin will embark on a UK in 2020, tickets on sale in September.

Chelsea Pensioner Colin THACKERY, who stole the nation’s hearts when he won Britain’s Got Talent TV show is the oldest person to ever sign a record deal, Colin did so during the summer of 2019 with Decca Records.

Colin, 89, brought the celebrity judges and studio audience to tears as he sang ‘Wind Beneath My Wings’ on Britain's Got Talent.

The tear-jerking performance was a tribute to Colin’s late wife Joan and earned him four ‘yeses’ from the judges David Walliams, Alesha Dixon, Amanda Holden and Simon Cowell.

Colin, who lives at the Royal Hospital, Chelsea, and is formerly of Thorpe St Andrew, Norfolk, said: “Joan was everything to me. And I remember as she was sitting in her chair she suddenly said ‘Colin’.

“Instantly, I just knew she was dying. I put my arms around her and she died there. I miss her like mad and talk to her all of the time. I tell her everything that is going on. She truly is the wind beneath my wings”

The couple had been married for 66 years.