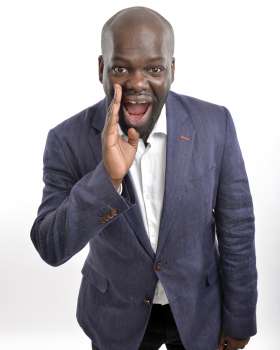 As seen in the final of Britain’s Got Talent 2017

Daliso Chaponda shot to fame on Britain’s Got Talent making it to the final of the 2017 series establishing himself a firm favourite with the judges and the British public. He became a Facebook and YouTube star amassing over 100 million views of his performances.

He has performed around the world and at the Edinburgh, Melbourne, Singapore, and Cape Town comedy festivals.

In 2018 Daliso undertook a sell out UK tour and starred in his BBC Radio 4 series Citizen of Nowhere. He has also appeared on Unspun with Matt Forde, The News Quiz, The Now Show, and The Apprentice: You’re Fired.

In addition to Stand up Comedy, Daliso is also a prolific fiction writer. He has published science fiction, murder mysteries and fantasy fiction in numerous magazines and anthologies. Recently, a play he co-wrote aired on BBC Radio 4.

“I could see you hosting your own show” – Simon Cowell

“You should be a comedy superstar” – David Walliams