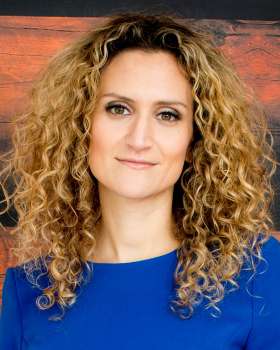 Dr Ellie is the current face of general practice - a young, vivacious, approachable doctor. From delivering a baby on the floor of her GP surgery to dealing alone with dying patients in the middle of the night, Ellie has a breadth of experience far beyond her years, working in an NHS practice on the world-famous Abbey Road in London. Having such a broad family-health practice this allows her to speak with authority on a range of issues such as diet, alcoholism, mental health, dementia and the changing climate of the NHS.

Ellie has had a very successful start to 2019 working on her third book idea and now a regular face and voice on Women's Hour, Radio 4, The Jeremy Vine Show, Channel 5 and BBC2's Victoria Derbyshire. She also features on talkRADIO often. As well as appearing still as the on-screen GP for Sky News Sunrise, she can also be seen and heard regularly commenting on health matters on ITV/Channel 5, CNN and BBC news and even channeled her inner-geek appearing in a Celebrity Eggheads team of TV doctors for BBC2!

2018 saw Dr Ellie publish her second book: 'Is Your Job Making You Ill?' which hit number two in the Amazon book charts. Her first book, 'Keep Calm: The New Mum's Manual' released in 2014 is still applauded as number 1 for first time parents by The Independent and Vogue, and was even recommended by The Sun in a feature of 7  “classics we should all read”. With a foreword by Jools Oliver, it is the perfect antidote to guilt-inducing parenting guides and competitive mums. Ellie is now regularly quoted in the parenting media with her expertise featuring in Mother & Baby and Boots Parenting magazines.

Ellie is the resident GP for the Mail on Sunday, Mail online, and writes regularly for Best and Boots Magazine as their resident GP.  She is widely quoted in the popular media on health matters and was featured in an article in Good Housekeeping as one of Britain's ‘Top 25 Female Doctors’. Professor Brian Cox tweeted that her Daily Mail article on the MMR vaccine was a “science communications triumph.”

Dr Ellie's TV career started on BBC1, as the in-house medical expert on The Secret Tourist. She also appeared as the GP on Sky Living's documentary Slave to Food as well as BBC1's Long Live Britain and was one of the key medical experts on two Channel 4's primetime health shows, Health Freaks, and Doctor In Your House. Most recently Ellie has been working with the Tonight team on ITV1.

Ellie is a charity ambassador for Save The Children, Meningitis Now and Pancreatic Cancer Action advocating for them both in the media and in parliament.

In 2015, she was invited to give evidence to the All Party Parliamentary Group on Body image. She has been invited to become a Champion of Choice for the British Pregnancy Advisory Service for broadcasting which they believe "tackles misinformation masquerading as science.”

Dr Ellie read medicine at Cambridge University and then completed her clinical training at the Royal Free Hospital, London. She spent five years in hospital medicine, before embarking on a career in General Practice. Ellie combines her clinical and media work with her "proper job" - being a mum to her two children.

"Dr Ellie Cannon was a fantastic and very welcome addition to the esteemed panel of judges for the Johnson & Johnson Journalism Awards. Her expertise and knowledge was invaluable and she provided excellent insight into not only our new Health Care Professional category but across all the shortlisted articles.” Mea Perkins, Account Executive at Red Consultancy “It was a brilliant discussion and it was fantastic to have your expert insight and knowledge playing such a key role within it.” Katie Alston, Senior Producer, BBC News & Victoria Derbyshire Programme.