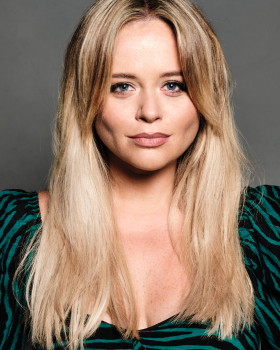 Emily is an actress, comedienne, writer and TV host.

Emily was a campmate on ITV's I'M A CELEBRITY... GET ME OUT OF HERE (2018) where she finished as Runner Up. It was officially announced that the series was the most watched of all time and nearly 4 million viewers voted for Emily to win. This series has gone on to win a BAFTA and a NTA.

Emily completed her sold out first comedy tour TALK THIRTY TO ME in 2019. She toured the country playing to packed houses and rave reviews. She will head out in late 2021 with her new show, EMILY ATACK HAS LEFT THE GROUP, produced by Live Nation.

In 2019, Emily was commissioned her own 3 part series, EMILY ATACK: ADULTING, which was broadcast on the W Channel and was on screen every night for 3 weeks hosting new dating show SINGLETOWN (ITV2) alongside Joel Dommett which has since been picked up by streaming service HBO Max in America. Emily then returned to the jungle as the new co-host of I'm A Celebrity companion show EXTRA CAMP on ITV2.

ITV2 have commissioned THE EMILY ATACK SHOW, a brand new 6 part sketch & stand up show, written by & starring Emily, which will be coming to the channel later in 2020.

Emily's debut book Are We There Yet?... To Indignity & Beyond! was an Amazon Bestseller. She has since continued her passion for writing by penning multiple guest columns for Grazia.

Emily has launched a hugely successful fashion range with the online retailer In The Style and her is a new face of Walkers Crisps alongside Gary Lineker. She has also recently worked with The Laughing Cow, Charles Worthington, BT & The Telegraph and in 2020 she teamed up with BAFTA to work with them on their coverage of their TV Awards.

As an actress Emily was most recently seen in the role of Debbie Harry in Sky Arts project GRACE UNDER PRESSURE and shot Series 2 of ALMOST NEVER (BBC).

In 2016 Emily made her stage debut playing Holly Golightly in BREAKFAST AT TIFFANY’S at the prestigious Theatre Royal Bath. The same year Marie Claire UK named her their GIRL OF THE MOMENT.