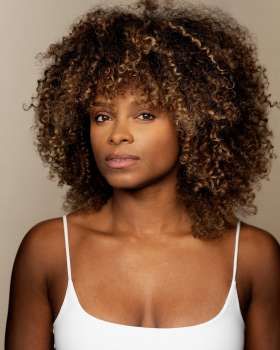 Recent acting credits for Fleur include ALMOST NEVER for CBBC and SLICED for Dave TV.  She won the hearts of the Nation by coming in the top three of 2018's I'M A CELEBRITY for ITV and 2019 sees her continue both her acting and music career.

“Nothing is as powerful as music,” declares Fleur East. “You can attach a song to almost anything in your life: whatever’s happened in your life, there’s a song that goes with it.” Fleur’s own life is the perfect illustration, with every milestone marked by music. Her first memory is of hearing Stevie Wonder on her fourth birthday; primary school days, she recalls, were soundtracked by the Spice Girls. Destiny’s Child’s ‘Say My Name’ sums up her early teens, while Usher’s ‘Confessions’ brings back memories of her first relationship. At university she obsessed over Britney’s ‘Gimme More’; more recently it was DJ Fresh’s ‘Louder’ — a song she sang while touring with Fresh for almost two years — while 2014 was summed up by ‘Uptown Funk’, the song that took her to the finals of last year’s X Factor.

Late 2015 was all about THAT monster hit 'Sax', Fleur's explosive debut single that smashed into the Top 3 UK Singles Chart and stayed in the Top 10 for seven weeks, and THAT performance on The X Factor, heralding her return to the music scene and sending social media in meltdown. 2016 was about spreading the word of her debut album 'Love, Sax and Flashbacks’, an album that is packed to the rafters with smart, dancefloor-ready pop bangers, and bursting with Fleur’s own addictive personality (which makes perfect sense, considering she co-wrote almost the entire thing). Smart and self-aware, Fleur knows exactly how it sounds when she tells you that she’s always wanted to sing. “I know everyone says that,” she laughs. “Of course they do. But I’ve truly been round the houses trying to make this work.

2016 was also spent promoting 'Sax' internationally with big success in Mexico, where the song went Top 10 on airplay chart and saw Fleur perform for 10,000 people at the Planeta 94.7FM show and 12,000 people for the Digital 102.9FM show. The single was certified Gold in the Netherlands and Australia, topped the airplay charts in Hungary and Croatia, and peaked at No.2 in Costa Rica. 'Sax' also made waves in the USA with Fleur making stunning appearances on top shows such as Dancing With The Stars, The Late Late Show and The Today Show.

The summer saw Fleur play numerous gigs across the UK including a breath-taking performance at V Festival in August, MTV Crashes in Coventry and both Brighton and Manchester Pride.

Within a year, DJ Fresh asked her to appear with him on a Radio 1 Live Lounge performance, which led to two years on the road with Fresh and the likes of Dizzee, Ms Dynamite, Rita Ora — plus Fleur’s first co-writing credit, on DJ Fresh’s song ’Turn It Up’. Alongside this Fleur continued to work on her own material and in 2013 self-released her first EP. “I was so determined,” she remembers. “The EP didn’t make any money — in fact I spent all my personal savings on that, from producing the CDs to hiring the street team to put up posters around London. I even organised the launch party! But I just wanted a body of work to hold in my hand — I wanted to say I’d done it on my own.”

After signing to Syco at the beginning of 2015 Fleur hit the studio, but having defined her own path for the the last seven years one thing that didn’t appeal was the idea of sitting back and waiting for other people’s songs to roll in. “One of the first questions I was asked when I went into Syco was: ‘Do you write and how much do you write?’” Fleur recalls. “I said: ‘I want to be in every single writing session.’ They went, ‘er… Right.’ I said, ‘just put me in there — see how it goes.’” It went rather well: the songs Fleur was contributing to were the best of the bunch. “I don’t want to be just a singer,” she says today. “I’ve done all that — standing on stage singing other people’s songs. This is my time now, for my music, and my own stamp. I want to be proud of this.”

Fleur’s is a story about how the right combination of passion, determination and talent will always pay off. But it’s also the story of how the best music always strikes a chord. “Songs can make you laugh or cry, they can cheer you up then bring you down again,” Fleur smiles. She has spent every spare second she has in the studio working on new material for her upcoming second album. “You can never underestimate the power of music. It means something to everyone. And it means everything to me."