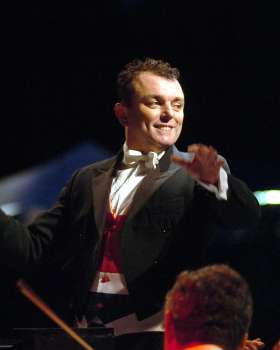 Jae is currently the musical director of Sister Act, due to open at Curve Leicester before commencing a UK Tour and a limited run at the Hammersmith Apollo starring Whoopi Goldberg.

Whilst consistently working in the West End, Jae has also been Musical Director on numerous television programmes for BBC Wales and S4C, including three series of Codi’r To (Raise The Roof), two series of Peter Karrie Unmasked, Mardi Gras and Ar Gamera. For the BBC, Jae has recorded The Magic Of The Musicals, The Gerswin Centennial Concert at the Royal Albert Hall and conducted on many Royal Variety performances with West End Musicals.

Jae has also worked as musical director on numerous Last Night Of The Proms spectacular concerts. These have seen him conducting across the country and working with some of the most famous orchestras in the world, including the Royal Philharmonic, the Philharmonia, the City Of Birmingham Symphony Orchestra, Welsh National Opera, English National Opera, English National Orchestra of which he is Principal Conductor, The Bangkok Symphony, The Istanbul Symphony and the Wren Orchestra. At these events Jae has accompanied international stars such as Sarah Walker, Julian Lloyd Webber, Sarah Brightman and Sir Willard White.  Jae had the privilege of conducting the Queen's Diamond Jubilee concert with Russell Watson at The Royal Albert Hall with the RPCO.

Jae has set up productions in Florida, Holland, Taiwan, South Africa and Singapore, including Cameron Mackintosh’s production of Lionel Bart’s Oliver! in Australia and the USA, and Michael Grandage’s Guys And Dolls also in Australia.