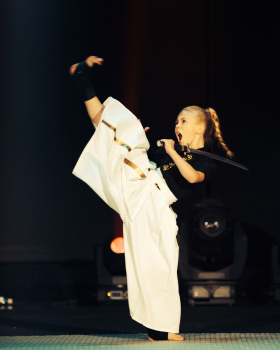 Jesse-Jane McParland shot to fame as a finalist in Britain’s Got Talent 2015. After narrowly missing out on a place in the finals, JJ was brought back as a favourite by public vote.  The then nine year old wowed judges and audiences alike with her thrilling performances, which combine sword work with kickboxing, kung fu and Tae Kwon Do. After her first performance on the show she received a standing ovation from all four judges, with Simon Cowell joking that he wanted the pint-sized phenomenon as his next bodyguard.

Since BGT, JJ has gone on to do numerous projects globally - performing on the Ellen De Generes show, taking part in a UFC campaign with Ronda Rousey, reaching the finals of Superkids and most recently having a high action cameo role in Season 2 of Into The Badlands.

In 2015 she was part of the legendary YouTube Rewind as one of that year's most watched virally with almost every video posted receiving hundreds of millions of views and retweeted by the likes of Hillary Clinton and Nicole Scherzinger!

She also appeared alongside Don ‘The Dragon’ Wilson, Cynthia Rothrock and Jansen Panettiere as a specially trained Space Coast Dojo Student in ‘The Martial Arts Kid’ released in the US in 2016 and in 2017 had a CBBC documentary made about her titled 'My Life.'

JJ’s motto is Not Every Girl Wants To Be A Princess….

INTO THE BADLANDS SCENE