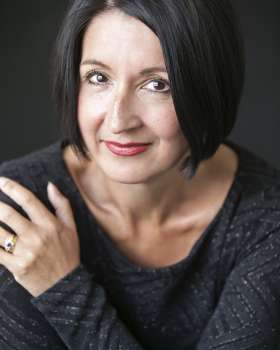 Jessica Martin is a well known leading actress. She most recently played the role of Mrs Blitzstein in the Union Theatre production of Lionel Bart’s “Blitz”, for which she was nominated this year’s Offie award for Best Lead Performance in a Musical. She received praise from critics, including;

“an outstanding performance” The Reviews Hub

“the heart and soul of the show” Musical Theatre Review

“..in Jessica Martin finds a superlative brain as well as musical theatre talent and skill to encompass this magnificent part.” British Theatre.com

In 2018 she was nominated the Offie Award for best Lead Performance in a play for her role as Dame Shirley Porter in Gregory Evans “Shirleymander” at the Playground Theatre. Michael Billington praised her performance in his review for The Guardian

“the role is dynamically performed by Jessica Martin, who gives the impression of a crisply tailored, unstoppable powerhouse.”

Jessica rose to fame as a young impressionist in the television shows “Spitting Image” and “Copycats”, made her acting debut playing the role of ‘alien punk werewolf Mags’ in the iconic series “Doctor Who” and quickly crossed over to become a West End leading actress as Sally in “Me and My Girl”. Since then she has enjoyed a jam-packed, diverse career in theatre, television, cabaret, one –woman plays, voice-over and in the past few years has become a critically acclaimed writer and illustrator of graphic novels.

The British Theatre Guide described it as “a brilliantly constructed and increasingly powerful experience”.