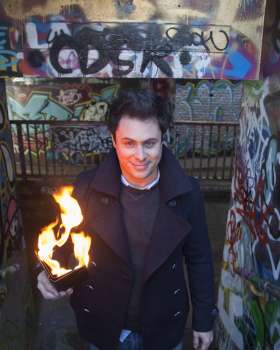 John is a magic consultant, actor and magician. He holds the title of Associate of the Inner Magic Circle with Silver Star, and trained as an actor at The Webber Douglas Academy of Dramatic Art.

John is illusions & magic assistant on Harry Potter & The Cursed Child (Palace Theatre), associate on Prince of Egypt (Dominion Theatre) and The Ocean at the End of the Lane, transferring from the National Theatre to the Duke of York's in 2021.

Credits as magic associate include The Ocean at the End of the Lane (National Theatre); Prince of Egypt (Dominion Theatre); White Christmas (Curve, Leicester) and A Very Very Dark Matter (Bridge Theatre).

John's relaxed style, gift of the gab and ability to hold an audience of any size combine to deliver a flexible act tailored to any occasion. He creates modern magic, always focusing on leaving his audience amazed and entertained. He has held residencies in hotels, restaurants and cocktail bars as well as performing at weddings, dinner parties and corporate events all over the UK and abroad.

John combines his knowledge of the theatre and stagecraft with magical techniques to help you create moments of pure wonder for your productions. He can help you with presentations, making them pack more of a magical punch, and can create bespoke magic effects for you to express your key messages or ideas. He is also available to help with the facilitation of workshops and can use his magic to re-energise groups, keeping them focused on the exact task they have been set.