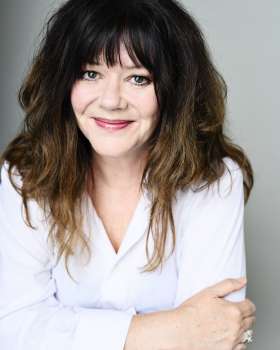 Josie is one of Britain's best loved actresses and comediennes who could recently be seen performing in OKLAHOMA for Chichester Festival Theatre where she played Aunt Eller.

She first became a household name in WHO'S LINE IS IT ANYWAY? for Channel 4, and is a founder member of The Comedy Store Players with whom she still performs.

On stage, she won the Peggy Ashcforft Award for TAMING OF THE SHREW at RSC, starred as Benedick in the all-female MUCH ADO ABOUT NOTHING at the Globe, and has starred as Anna in THE KING & I at the London Palladium and ACORN ANTIQUES THE MUSICAL with Victoria Wood at the Theatre Royal, Haymarket.

On screen, she had her own Channel 4 series JOSIE, and was critically acclaimed in OUTSIDE EDGE opposite Timothy Spall and Brenda Blethyn. Some of her other much loved star vehicles have included ENCHANTED APRIL and DOWNWARDLY MOBILE

Josie will next be seen starring in Jonathan Harvey's brand new play OUR LADY OF BLUNDELLSANDS at the Everyman, Liverpool.