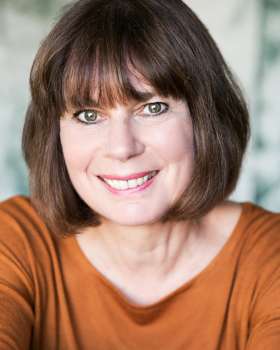 Julia works extensively on both stage and screen.

Recent theatre credits include; Ruth in the National Tour of CALENDAR GIRLS THE MUSICAL, Dolly Bantry in THE MIRROR CRACK'D (National Tour), Liz in WORST WEDDING EVER by Chris Chibnall (Salisbury Playhouse/New Wolsey/Queen’s, Hornchurch) and Gertrude in HAMLET and Countess ALL'S WELL THAT ENDS WELL in the 2016 Tobacco Factory Season.

Julia played Kath in ENTERTAINING MR SLOANE at the Leicester Curve, following her run in CALENDAR GIRLS in the original cast in the West End and on tour. Other theatre credits include THE SCHOOL FOR SCANDAL and Margaret in SPRINGS ETERNAL.

She is of course best known as Rona in nine series of 2.4 CHILDREN for BBC, and has more recently appeared in LAW & ORDER, OUTNUMBERED, CASUALTY, and as recurring character Morag on EASTENDERS.