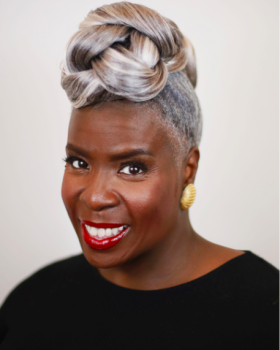 Leader and Founder of The Kingdom Choir, Karen Gibson grew up in south London and was showing an aptitude for music at a young age — she’d later learn that music was in her blood, as her grandmother was in a group who’d tour the villages of West Coast Berbice, Guyana.

At age ten Karen would travel with her younger sister Kimmie to piano lessons where an inspirational piano tutor encouraged her students to explore every musical avenue.

Karen developed a passion for oboe, eventually forming a gospel wind quintet with Kimmie and three others who are friends to this day, with Elaine and Collette now members of The Kingdom Choir.

Karen’s horizons broadened even further when her father introduced her to soul and jazz fusion, and when under her own steam she started discovering London’s plethora of diverse pirate stations. The woodwind quintet morphed into a more straightforward gospel group called New Dawn, whose members are still in touch today. Along the way Karen and the people she grew up with have each been involved in a number of other choirs, but it’s The Kingdom Choir that seems to have resonated the most. It’s strange to think that The Kingdom Choir didn’t even have a name when it was invited to perform on the BBC’s 35th anniversary edition of Songs Of Praise in 1996, but that appearance was a pivotal moment for both Karen and a choir that has gone on to travel the world and perform for and with countless cultural and political icons. No appearance has made quite the impression of this year’s royal wedding, though. And a week after the royal wedding, Karen got a call from Professor Jonathan Shalit OBE, the renowned British talent manager who has been instrumental in guiding the careers of many superstars both in the UK and globally. He had been inspired to get in touch, he told Karen, after reading a newspaper profile in which what she didn’t say was just as important as what she did say. Specifically, they said nothing about wanting to make a record. But he was convinced he could help them make the right album, for the right reasons, at the right time.. “We agreed to meet and what I liked about him was that he was so direct,” Karen smiles. “He asked the most probing questions. He wasn't the usual type of executive or business person.” Sensitive to the choir’s grounded personalities and its mission, but keen to bring their message to a wider audience, Shalit opened the door to Sony Music.

“It’s all about connection on a social, spiritual and professional level,” Karen says of The Kingdom Choir’s journey so far. “It’s not all about the singing, actually — it's about spirit. Not everyone has the same voice but the wonderful thing is that while one person might crumble, in a team everyone can sound like a genius. Some girls would cry to sing a solo, but they can sing out loud as part of the choir, because they have their sisters with them. It's not about reaching the top. Life is a journey and, if you're smart, you never stop learning.”

That’s certainly true for The Kingdom Choir’s inspirational founder, who could hardly have predicted her own journey — and how much she’d continue to learn — when she was made redundant from that old job in IT nearly thirty years ago. “I don't know where it's going to end,” she smiles. “I haven't quite got a handle on how huge it all is. Perhaps I need to grow into a new Karen, but I think life will be a lot like it was for the old Karen — just with new things to do, new conversations to be had, and new barriers to be torn down.”