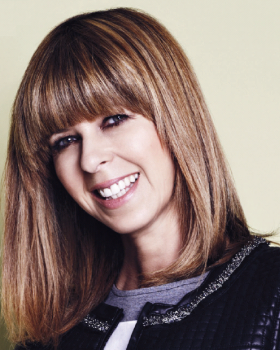 READ PRESS The Joy Of Big Knickers Kite and Cosmic

Kate Garraway can currently be seen throughout the week on ITV's Good Morning Britain. She also presents her own daily radio show on Global's Smooth Radio 10am-1pm.

Kate wrote her first book last year - an amusingly candid look at middle-age for the modern woman. 'The Joy of Big Knickers' published in hardback on 9th March 2017. Kate has also designed her own range of childrenswear for M&Co called Kite & Cosmic.

Having presented on GMTV & DAYBREAK for eleven years, in her previous role as Entertainment Editor for Daybreak, Kate has interviewed some of the biggest names in the world of entertainment, including Tom Cruise, Johnny Depp, Justin Timberlake, Nicole Kidman and Julia Roberts.

Before GMTV, Kate joined Sky News in 1998 as a main anchor on its breakfast show, Sunrise. Prior to joining Sky, Kate worked in BBC radio and with ITV news and presented Meridian Tonight, before being picked as one of the team of presenters to launch BBC's 24-hour rolling news channel, News 24.

In addition to her work on GMTV,Daybreak & GMB, Kate has been involved in a wide range of network programmes including BBC1's Strictly Come Dancing. She remained in the show for several weeks before leaving in week 7 after struggling through an injury she received during rehearsals.

Kate has interviewed Michael Palin for his travel show Around the World in 80 days and travelled to Ethopia for Daybreak.

Kate is married to Derek Draper and has two children: Darcey and Billy.