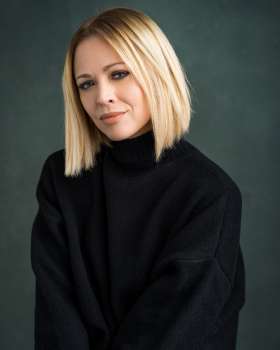 Kimberley Walsh is a girl who knows how to juggle. Over the last few years she has danced her way to the Strictly finals, written her autobiography, released a debut solo album, starred in West End musicals, presented TV shows, and performed in sold out arenas around the country.

Kimberley rose to prominence in the record-breaking girl band Girls Aloud. During their 10 years together, the group achieved twenty consecutive top ten singles in the UK, including four number ones. They were named the UK’s biggest selling girl group of the 21stcentury, with over 4.3 million single sales, and 4 million albums sold in the UK alone. Amongst their numerous awards and nominations, the girls received the 2009 BRIT Award for Best Single for The Promise.

Since the band disbanded, Kimberley has gone on to achieve enormous success in all areas of the entertainment industry. As a TV presenter, Kimberley co-hosted the Channel 5 special Strictly: Before They Were Stars alongside Gethin Jones, guest presented on Lorraine and Loose Women, as well as the weekly style slot on ITV's This Morning. She co-presented Viva's weekly music show Suck My Pop, fronted a one-off documentary Blue Jean on Sky1 and presented live events such as The BAFTAS and The X Factor. She also recently voiced series two of the Channel 5 series One Night with My Ex.

In 2012, Kimberley took part in series 10 of BBC’s flagship entertainment show Strictly Come Dancing. Her weekly routines wowed audiences and judges alike, receiving three perfect 40’s during the series which catapulted her to the finals, where she finished runner up. In 2017, she was asked back to take part in the Strictly Christmas Special, receiving the highest score from all four of the judges.

Kimberley has released Centre Stage, her debut solo album, and has collaborated with a diverse range of musicians such as Alfie Boe, Ne-Yo, Ronan Keating and Jamie Cullum, to name a few. In 2018, she presented her much anticipated one woman show for a week-long residency at London’s Crazy Coqs, and headlined the West End production Christmas Spectacular at the Theatre Royal, Drury Lane.

As an actress, Kimberley has starred as series regular Rebecca in Disney’s The Lodge, and hit the big screen too after appearing in children's movies Horrid Henry and All Stars. Last year she was cast as Claire Butterworth in the second series of Channel 4’s Ackley Bridge. In addition, Kimberley has been a regular on the West End Stage. She won rave reviews for her role as Princess Fiona in Shrek The Musical, embraced the festive spirit in the magical Elf the Musical, and joined Denise Van Outen for a week long run at Cadogan Hall in the classic Sweet Charity. She could most recently be seen starring as Susan Lawrence in the West End premiere of Big The Musical at the Dominion Theatre, London, and as Annie Reed in Sleepless at the brand new Troubadour Wembley Park Theatre.

Kimberley is proud Mum to sons Bobby and Cole, and has recently launched Kimba Kids - a new clothing rang for children.