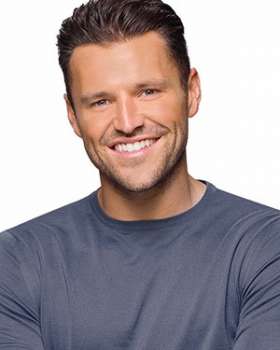 MARK WRIGHT is one of the most popular broadcasters in the UK. His current projects include hosting The Gossip on ITV2, pulling the nations heart strings on ITV1’s Surprise Surprise, helping to build breath-taking hideaways for kids on CBBC’s Dengineers and getting you ready for a night out with his Club Classics show on Heart FM every Friday and Saturday night.

All of this started for Mark back in 2010 when he appeared in a new formatted reality show called The Only Way Is Essex. Being in just 3 series’ of TOWIE garnered him enough of a fan-base for ITV to offer him a place on celebrity reality series, I’m A Celebrity Get Me Out Of Here. He emerged from the jungle in 2nd place and immediately began filming his own series for ITV2 called, Mark Wright’s Hollywood Nights.

Back in the UK, Mark was signed dup to co-host Take Me Out: The Gossip, the highly popular companion show to the hit ITV1 dating show, Take Me Out.

Next he focused his time away from our screens and launched his own range of fragrances; Mr Wright for the guys, and Mrs Wright for the ladies. Soon after the launch Mark was credited in the beauty press for encouraging men to take more time with their appearance.

Towards the end of 2012 Take Me Out: The Gossip was back for a 2nd series and Mark secured himself his nationwide, twice weekly radio show on Heart FM.

2013 kicked off with yet another series of The Gossip and with ITV1 asking Mark to present the VT’s on their Sunday prime-time series, Surprise Surprise. He also began working with ITV2 on what would be his 2nd series, Party Wright Around The World. Simultaneously, Mark was snapped up by online fashion giant, Littlewoods, to be the face of their menswear brand.

Mark has also taken part in BBC1’s Strictly Come Dancing where he reached the Final, he was also handed the reigns on TOWIE LIVE for the launch of the new ITVBE channel, married the girl of his dreams and filmed his first TV advert, for Oykos yoghurt and has most recently made his US TV debut as a correspondent on Extra!