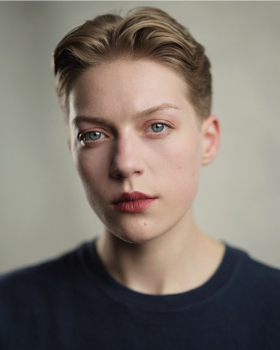 Tilda Wickham is a non-binary performer, writer and activist currently playing Malcolm in Macbeth at Queen’s Theatre, Hornchurch, then going on tour to Derby Theatre, The New Wolsey (Ipswich) and Perth Theatre. Last year, Tilda performed as part of the cast of Either by Ruby Thomas at Hampstead Theatre and played Fish in Zoe Cooper’s Out of Water at the Orange Tree Theatre, for which they received an Offie nomination for Best Performance.

In their final year at Cambridge University, Tilda played Juliet in Shakespeare's Romeo & Juliet directed by Tom Littler, at the Cambridge Arts Theatre, and directed Melissa Bubnic’s Boys Will Be Boys at the ADC Theatre. In 2017, Tilda played Anna of Cleves in the original cast of SIX The Musical in its sold-out run at the Edinburgh Fringe Festival, and Esmer-Younga in the  Footlights Pantomime: The Hunchback of Notre Dame.

Tilda also co-wrote (co. Robbie Taylor-Hunt) and performed in A Queer Anthology of Dating at Southwark Playhouse, as part of the Anon Is A Woman festival of new writing (2018), and again as part of Maiden Speech Festival II at Tristan Bates Theatre in 2019. Tilda recently spoke on ‘The New Normal’ panel, led by Christopher Kenna (CEO of Brand Advance), discussing LGBTQIA+ representation in media and advertising and on the ‘Binaries and Beyond’ panel held at Tristan Bates Theatre as part of Maiden Speech Festival III. They continue to write and advocate for non-binary people in the arts and will soon be recognised at the Offies 2020 ceremony, as their nomination was the catalyst for merging the male/female performance categories into a more inclusive single, non-gendered category.