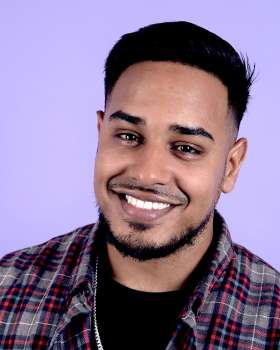 Mim Shaikh is a Broadcaster, Actor, Poet and Writer.

You may have seen his debut factual documentary about the search for his estranged Father; MIM SHAIKH: FINDING DAD - which aired on BBC Three and BBC One at the end of 2018. It surpassed over a million viewers in the UK alone and accumulated over 750,000 online views. He has starred in the BBC Drama, INFORMER, and will be starring in the BBC comedy, KING GARY, in 2020. Mim has also starred in the dark comedy feature film FREEHOLD and accumulated over 2.5 million views in the short film SUNNI//SHAI which was shown across classrooms in the UK. Mim has presented radio shows on the BBC Asian Network, BBC Radio 1Xtra and BBC Radio 1.

He has just been apart of the third series of the BBC2 documentary series PILGRIMAGE: ROAD TO ISTANBUL, where he goes on a spiritual trek in Turkey. You may have also seen him fine tuning his culinary skills on last year’s CELEBRITY MASTERCHEF.

He has over 35k subscribers on his Youtube Channel and just over 10.5k followers on Instagram. He is currently writing a TV series and developing a film script for his own feature film.