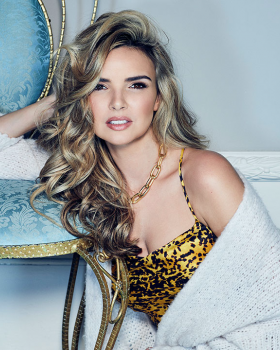 Nadine took part in 2019's I'm A Celebrity... Get Me Out Of Here! alongside the likes of Caitlin Jenner and Ian Wright, and came fourth place.

In October 2019 The Guardian ranked Nadine Coyle as the 7th Best Girl Member Of All Time.

Irish singer, songwriter and actress, who with Girls Aloud achieved a string of 20 consecutive UK top 10 singles, two UK number albums and 5 BRIT Award noms. She has become synonymous as a PRIDE headliner up and down the country performing to thousands of sell out crowds. In 2019 Nadine released single 'Fool For Love'.

Her branding and endorsements include a hugely successful eyelash range with Eyelure, she was a SpecsSavers Spectical Wearer Of The Year Ambassador.

Other TV Credits include being a guest judge on America's Next Top Model next to Tyra Banks.