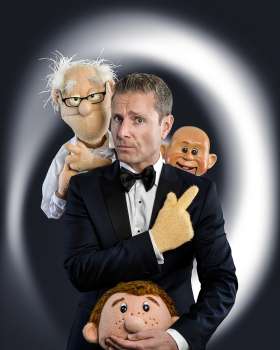 Following a Las Vegas residency at the legendary Planet Hollywood with his hit show Mouthing Off, starring roles in Olivier Award-winning Cinderella, Snow White and Goldilocks & The Three Bears at The London Palladium, and a successful 2017 UK Tour All Mouth, AMERICA'S GOT TALENT WINNER PAUL ZERDIN toured the UK last autumn with his brand new show, PAUL ZERDIN'S PUPPET PARTY.

Paul made his TV debut in In 1996 as the first outright winner – by over 100,000 votes -  of LWT’s The Big Big Talent Show, hosted by Jonathan Ross. Since then he has appeared on countless TV shows including Comedy Central's The World Stands Up, ITV1's Comedy Rocks with Jason Manford, Tonight at The London Palladium, The Princes Trust Gala and three appearances at The Royal Variety Performance.  His auditions for America's Got Talent have racked up millions of views on YouTube and Paul is currently developing TV projects in both the UK and the US.

Paul is a regular favourite for corporate event bookings, and private celebrations and weddings. He is available for after dinner sets, award hosting and more. Recent corporate clients include Jewish News, Parkdean Resorts and Printweek.

"Simply put, Zerdin is the man who can make ventriloquism look cool” – The Stage

“Every now and then you stumble across a finished article, a show so polished it shines. Paul Zerdin: Sponge Fest is one of these shows. A ventriloquist at the top of his game, Zerdin is so sure of his skills and so in control of his material that he isn’t just performing – he’s showing off, clearly having as much of a laugh as his audience." - ***** – The Scotsman

Paul Zerdin On Winning America's Got Talent | This Morning