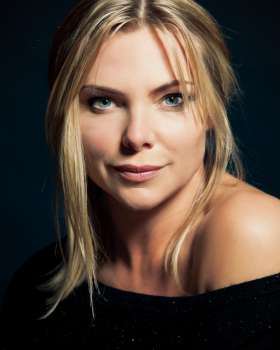 Samantha Womack is an actress who has starred extensively in Television, Film and Theatre.

Her television credits include Ronnie Mitchell in EASTENDERS, Tanya in 3 series of MOUNT PLEASANT, Ingrid in HOME AGAIN, Ruth in BABES IN THE WOOD, Imogen in IMOGEN'S FACE and Mandy in the hugely popular GAME ON. Samantha has also starred in FORGIVEN, THE LAST DETECTIVE, STRANGE, JUDGE JOHN DEED, LIVERPOOL 1, PIE IN THE SKY and THE GRIMLEYS. She will next be seen in BBC1's hit series SILENT WITNESS.

Samantha will be reprising her role as Morticia Addams in THE ADDAMS FAMILY for a new UK Tour in 2020 after going on tour with DIAL M FOR MURDER.