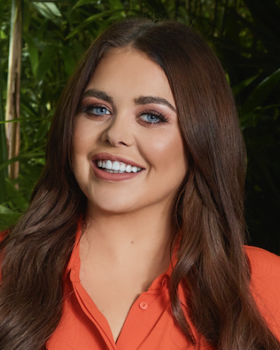 Scarlett has become a regular on TV screens after making the public laugh with her quick-witted humour on GOGGLEBOX and then crowning her Queen of the Jungle on on I'M A CELEBRITY.

Her warmth and bubbly personality has led Scarlett to land her a number of presenting roles, including working with Ant and Dec on SATURDAY NIGHT TAKEAWAY (ITV) and 2 series of EXTRA CAMP (ITV2). Her success in these roles led her to take on Davina McCall’s previous position as host of dating show STREETMATE and to work alongside Dermot O'Leary on the National Television Awards.

Away from the camera, Scarlett released her debut book ‘Scarlett Says’ in 2016, which was met with great acclaim, topping the Sunday Times Number 1 Bestsellers list. She followed this up with her second book, ‘Me Life Story, Sofa So Good’.

Most recently Scarlett and her family starred in the hugely successful Channel 4 documentary THE BRITISH TRIBE NEXT DOOR where the Moffatt family moved to live with a tribe in Namibia for a month. It was one of the most talked about shows in 2019.

You can also hear Scarlett as the host of the popular Ru Paul's Drag Race UK podcast via BBC Sounds.