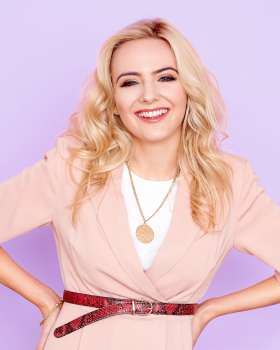 Steff is best known for her hilarious stand up and amazing celebrity impressions.

Steff has gained worldwide attention with her viral impressions of stars ranging from the Kardashians, Love Island, I’m A Celeb, judges from The Voice, BGT and many more, making her one of the hottest emerging talents in comedy.

Steff recently gained national headlines when a series of impressions went viral, racking up over 20 million views and were featured by ITV, E4, Comedy Central, Radio 1, The Daily Mail, The Mirror, Twitter Moments and many more national and international media outlets.

Steff has created a number of sketches performing impressions of celebrities at home from pop stars on a group zoom chat, to reality stars keeping up with the latest TikTok trends. Steff’s impressions have been well received by the celebrities she has impersonated with many of them sharing her videos, whilst also performing her impressions to the celebrities in person, such as Amanda Holden on Heart FM and Charlotte Crosby on MTV.