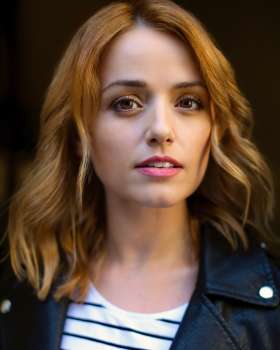 Stephanie has been announced to play Princess Anna in the Original West End cast of Disney's FROZEN which will open on 30th October at the Theatre Royal, Drury Lane.

Stephanie is an Irish actor/vocalist/voiceover. She trained at Trinity College in her hometown of Dublin.

Following her recurring role of 'Aisling' in Ireland's longest running TV soap Fair City, Stephanie's career expanded into the Irish theatre scene before propelling her into London's West End. Stephanie made her West End debut performing the role of 'Natalie' in the original cast of The Commitments, directed by Jamie Lloyd.

Stephanie has worked as a vocalist with a number of musicians/composers, including Burt Bacharach, Westlife, Bill Whelan (Riverdance), Mike Scott (The Waterboys) and Conor Linehan. She features as a guest soloist on the the self-titled debut album by Niall O'Sullivan, which reached number 1 in the Irish Classical iTunes charts and the top ten in other European countries. Boasting great versatility of vocal styles - from pop/rock and soul to musical theatre/ballad - Stephanie has performed on TV shows including The Late Late Show, Ant and Dec's Saturday Night Takeaway, This Morning, The One Show and Children in Need. Some other highlights to date include performing to Tom Jones, Patrick Stewart, Elaine Paige, Randy Bachman, Bill Bailey, Tim Minchin, Michael Bloomberg and President Mary McAleese.

Stephanie features prominently on the Original West End Cast recording of Close To You: Bacharach Reimagined. Also, Stephanie's recent recording of She Used To Be Mine (from Waitress) received high praise from Elaine Paige who has played it on her popular BBC Radio 2 show.

SHE USED TO BE MINE (Cover) - Stephanie McKeon