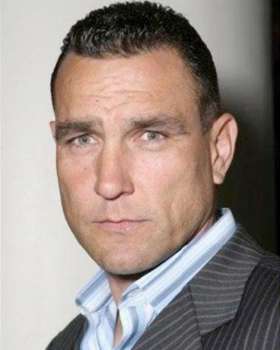 Vinnie recently shot feature film I AM VENGEANCE: RETALIATION having just completed another feature, LONDON CALLING, which he has Produced.

Vinnie has also produced THE BIG UGLY, which he stars in alongside Ron Perlman & Malcolm McDowell.

It was in 1998 that Vinnie was approached by up and coming director Guy Ritchie for a role in his cockney caper movie, LOCK STOCK AND TWO SMOKING BARRELS. Vinnie accepted the challenge and from this point, the former footballer had a new calling: movie star. Lock, Stock And Two Smoking Barrels skyrocketed to the top in Europe and the USA, and Vinnie’s new career ascended in the same direction. He went on to star in hits such as SNATCH, GONE IN SIXTY SECONDS and SWORDFISH.

To this date Vinnie has appeared in nearly 100 screen projects, working with some of the film industry’s top producers and directors including Mathew Vaughan, Jerry Bruckheimer, Brett Ratner, and Gary Lucchesi. He was seen in the massive blockbuster, X-MEN 3: THE LAST STAND as Cain Marko, better known as the Juggernaut, forever placing him in an iconic league of actors alongside Hugh Jackman, Ian McKellen, Halle Berry and Patrick Stewart.

Prior to that, he played the scowling football coach illustrating both his likeability and comedic side in DreamWorks’ SHE'S THE MAN. Other films include THE MIDNIGHT MEAT TRAIN, and then the Quentin Tarantino-produced feature film HELLRIDE. Vinnie revisited his comedic side on the feature film YEAR ONE, where he starred alongside Jack Black for Sony Pictures and Judd Apatow. In 2013, Vinnie did an arc on ELEMENTARY for CBS and an episode of PSYCH for USA. He also starred in his own documentary series for National Geographic Channel called “VINNIE JONES: RUSSIA'S TOUGHEST.” The show aired in prime time on September 2013 in over 170 countries to great success. Most recently he was seen in Mikael Håfström’s thriller, ESCAPE PLAN, opposite Sylvester Stallone, Arnold Schwarzenegger, Amy Ryan, Jim Caviezel, and Vincent D’Onofrio.

He recently competed in The X Factor: Celebrity on ITV and then returned to the channel to star in Harry's Heroes: Euro Having A Laugh.

Vinnie's third book, Lost Without You: Loving & Losing Tanya, will be released on 3rd September 2020 and is published by Orion.